Author, Doctor, Member of the Order of Australia

Barry Wren grew up on his father’s sheep station in the mid-west of NSW and had his early schooling by correspondence. He was awarded a Commonwealth Scholarship to Sydney University and on graduating in1955, married and began his postgraduate career. His initial research and work as an obstetrician and gynaecologist took him to West Australia, the United Kingdom and Nigeria before returning to Australia in 1964 where he became Associate Professor in Obstetrics and Gynaecology at the University of NSW. He was always interested in the endocrine health of women and became a founding member of the International Menopause Society in 1976. In the early 1980’s he organised meetings of those Australian doctors interested in the health and management of post-menopausal women and began the Australian Menopause Society, becoming its first President in 1988.

He has written many papers and a number of textbooks for students and medical practitioners as well as educational books for women.

In 1997, he was awarded the Australian Menopause Society Medal of Distinction and in 1999 the Australian Government recognised his service to the health of women by awarding him Member of the Order of Australia.

He is married with three sons. 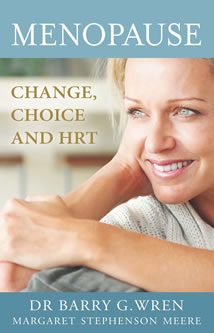 Menopause: A must read for all health care providers

Book Review: “Menopause,Change Choice and HRT” Dr Barry G Wren and Margaret Stephenson Meere This book ‘Menopause Change, Choice and HRT’ is a timely reminder that for many women transitioning through this important marker in their ageing process, there is sound advice and guidance at hand that will enable most women to make informed choices.

AUSTRALIAN doctors are being told to reconsider hormone replacement therapy for menopause after a major review found the controversial treatment was safe for most women in their 50s. Over the past decade, hundreds of thousands of women have abandoned or avoided HRT to treat symptoms of menopause because a 2002 US study said it dramatically increased the risk of heart disease, strokes, breast cancer and blood clots.

Book Review Menopause: change, choice and HRT By Dr Barry G. Wren and Margaret Stephenson Meere Rockpool Publishing; Summer Hill, 2013 Over the last 11 years menopause has experienced its own ‘dark ages’ much to the detriment of women who happened to be transitioning menopause or who were post-menopausal.