Scott Alexander King is an author, earth medicine practitioner and public speaker. Scott's unique ability to communicate with the animal spirit realm and the energies of the Earth began when he was just eight years old. As a child, Scott realised he could see animal spirits (not 'dead' pets, but the inherent power of animals that walk with us: the power that was once incorporated into tribal lore and labelled as 'totem' energy).

Although Australian by birth, Scott looks to the animals from a global perspective: his knowledge is not limited to only the teachings of the Indigenous culture or Australian geography. He seems to have an inherent understanding of all animals - no matter which continent they inhabit. As a child, Scott relied heavily on his 'feelings' when it came to meeting new people. This energy warned him of deceit, rewarded him with promise and allowed him to successfully navigate his way through a very confusing childhood. As he grew this 'energy' took form until he began to recognise it as being 'animal-like' in vibration - energy that he felt a natural bond with, energy that has never let him down. With years of study and practice, Scott has refined his abilities and is today Australia's foremost Animal Spirit Mystic, nature-inspired Psychic Medium and Earth Medicine teacher. 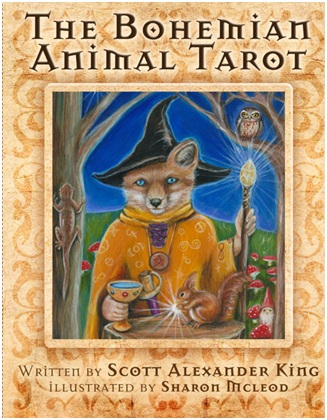 Published on Jan 13, 2015 An unboxing and card flick through video of the Bohemian Animal Tarot For more information on the reviewer go to Ethony Dawn You Tube Channel at https://www.youtube.com/channel/UCDMfUy-7wAb6H_3_GiphPgw

Blending 15th century Tudor and Elizabethan-inspired costumes styles with a classical late Baroque, Victorian and French theme and a touch of Romany Gypsy, The Bohemiam Animal Tarot is a Tarot set that has never been seen before.

The Bohemian Animal Tarot is a curious and very pretty deck, with both the innocence and occasional artless brutality of a Grimm fairytale. The hybrid creatures depicted in this deck have human bodies and animal heads – somewhat reminiscent of Egyptian gods.